I attended the Houston Area Regional Competition of Chefs Under Fire at Rice University in Houston on September 25th. Russ Kane of VintageTexas.com won two tickets to the event but was unexpectedly called out of town, so he asked if I could attend in his place. 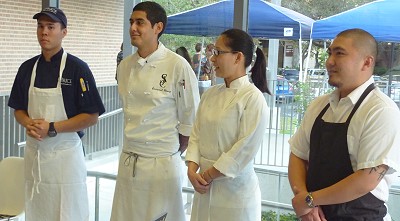 Contestants in the Houston competition were Anthony Elumn, Emmanuel Chavez, Christina Lee, and Harold Wong. The judges for the competition were David Grossman (Executive Chef/Owner of Branch Water Tavern), Hugo Ortega (Executive Chef/Owner of Hugo’s & Backstreet Cafe), and Monica Pope (Executive Chef/Owner of t’afia). Being a fan of cooking shows including Bravo TV’s Top Chef and Top Chef Masters, I had previously watched Monica Pope in Season 2 of Top Chef Masters last year. Devon Broglie (Master Sommelier of Whole Foods Market) was the emcee for the event. He is one of only 6 Master Sommeliers in the state of Texas. When I went to TEXSOM (Texas Sommelier Conference) this year, Devon Broglie was also there.

While at TEXSOM I first met Diane Dixon, co-founder of Keeper Collection. She recognized me at the Houston event and made a point to say hello. Diane also introduced me to the special guest sommelier, Vanessa Treviño Boyd of Philippe Restaurant + Lounge who was pouring the various wines available to the guests. Speaking of the wines, there was a nice selection of wines to drink including one Texas wine, Fall Creek’s Meritus. Besides the wine, there was also a nice selection of hors d’oeuvres to eat.

The chefs had to prepare a complete dish using a set of secret ingredients announced at the competition while sharing the kitchen with the others. Houston’s secret ingredients were protein sirloin flap steak, heirloom eggplant, Chinese long beans, and Katz coffee. They were required to use the protein and also one of the three other ingredients. They could also use two additional ingredients: pancetta and Worcestershire sauce. In addition to the secret ingredients, the contestants could bring four of their own ingredients to use. The most unique ingredient brought by a contestant was the cereal Cap’N Crunch brought by Harold Wong.

Each contestant had one hour and ten minutes to prepare their dish. The judges then tasted each contestant’s dish, asked questions, and made notes. After all four contestants had presented their dishes, the judges deliberated and returned with their decision. First runner-up was Christina Lee and the winner of the Houston Area Regional Competition was Harold Wong. 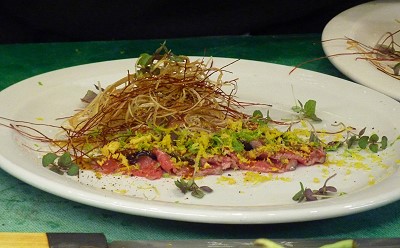 Overall the event was fun and it was interesting seeing the contestants in action. I would highly recommend attending the Finals in Austin if you are able to do so.