As we have mentioned before, the Texas Winery Passport program is definitely something you should be involved with if you are visiting Texas wineries. The rewards get better and better as you visit more wineries. Even though the Texas Winery Passport program will be changing in some way at the start of September, we still recommend collecting passport codes as you visit Texas wineries.

We have reached a passport level where the rewards are now given out by the wineries instead of the Texas Department of Agriculture. The latest reward chosen for us was an overnight stay and private candlelit wine dinner for two in the barrel room at Los Pinos Ranch Vineyards. This of course sounded great to us, and it didn’t hurt that Los Pinos Ranch Vineyards is one of our favorite wineries.

The challenging part was trying to arrange a date that would work for both Los Pinos and us. Andrea Taylor from Los Pinos was very helpful in arranging a date. The issue was that Los Pinos currently has one cottage available and we had to find an available night where other guests had not already reserved the cottage. In addition, we had to choose a time period where harvesting would not affect the barrel room dinner. We decided on a date which should have fit between two harvest periods and have availability of the cottage.

Our overnight stay was going to be on a Saturday night but since we were driving four hours to the winery, we decided to see what else we could do during the weekend. We headed to East Texas Friday night and went to KE Cellars in Tyler. I had arranged with Twitter friend Darlene for us to meet her and her husband Roger there to enjoy some of the Texas wine KE Cellars offers and to listen to the live music.

We arrived earlier than expected but enjoyed looking at the variety of Texas wine KE Cellars sells. We bought a bottle of Llano Moscato and found a table in the live music room to wait for Darlene and Roger. It was not a long wait as they soon arrived. None of us had met before, but after almost two hours of a fun conversation it seemed like we had previously been friends. Upon leaving, we all said we would have to get together again when one was in the others part of the state.

The next morning Gloria and I decided to do something a little thrilling – zip lining. I had previously done it near Austin but it was Gloria’s first time. Wired claims to have the tallest towers and longest zip lines in Texas. They definitely were taller, longer (longest being 1,115 feet), and faster than the previous ones I had done. Fortunately we had decided to get there at 8am because as expected, the heat eventually got extreme. Gloria had a fun time and said she would do it again. 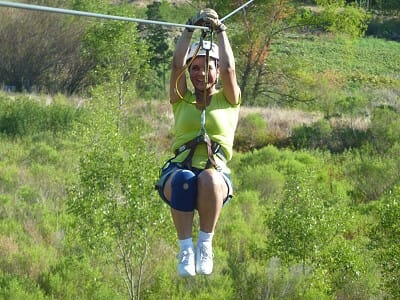 After making a nice visit to Crump Valley Vineyards (post to come soon), we headed to Los Pinos Ranch Vineyards. As we drove down the narrow bumpy road to their winery, I received a phone call from Gerald Jones, their Sales Director, asking if we were there yet. Talk about timing. It turned out he was on the road again with a refrigerated truck and probably wouldn’t be back at the winery that evening. He was checking to see how late we would be staying in the morning. We said we could wait until he got back. In the morning however, he texted us saying he probably would be much later than he had anticipated. It turned out to be another missed opportunity to see Gerald again. Gerald, if you’re reading this, just request us to help work your table at the next Old Town Spring SpringFest.

We checked in at the tasting room and met Andrea who I had been corresponding with, so it was nice to put a name with a face. She told us earlier in the week that harvesting was unexpectedly happening sooner than normal because of the heat, so we probably could not have the barrel room for the dinner. We were given a choice to either reschedule or just eat in the main dining area. The dining room was fine for us. We were told to pick any table and they would reserve it for us for the evening. We chose a nice corner table in the rear where it was a little more private but still had a nice view of the stage where jazz would be happening later in the evening. 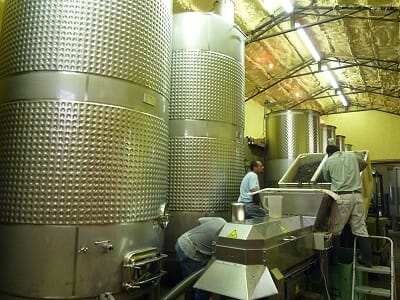 Andrea said the barrel room and production facility was busy at the moment with workers harvesting Sangiovese which had just come in. She brought us in to show us what was happening and they were loading the grapes into the destemmer. Owner Jeff Sneed was helping out and said hello to us. I mentioned how we saw they just came out with a Moscato and couldn’t wait to try it. He told us he thought it was the best label yet on their wine. That made sense because when you see the label, it has a picture of Jeff on it. Yes, he’s one funny guy. 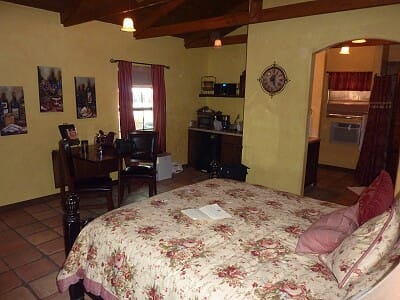 We received the key to the cottage and checked it out. The cottage was very nice and romantic, complete with Jacuzzi. After unpacking, we headed back to the tasting room to quench our thirst.

After sitting at our table, our waitress asked what we would like for dinner. We had a choice between the normal tapas menu or the Chef’s Special that evening: scallops in prosciutto cups with sautéed spinach and potatoe crispadoros. That sounded delicious so it was an easy choice for us. We also would receive a bottle of wine and the Chef’s Special menu said the vintner recommended either the Chardonnay or Moscato Reserve. This was working out perfectly so we of course chose the Moscato.

We chose to get a pizza margherita as an appetizer. The bottle of Moscato arrived but we decided to do a tasting of their sweet and dry wines first to decide if there were any other wines we would like to drink later or buy to take home. As mentioned previously in the Los Pinos Ranch Vineyards post, the tastings are done a little differently than other wineries since they are served at once in test tube-like bottles. We are normally white wine drinkers but we really liked the Sangiovese and Cabernet Sauvignon Reserve, so we decided to ask later to get some bottles to take home. 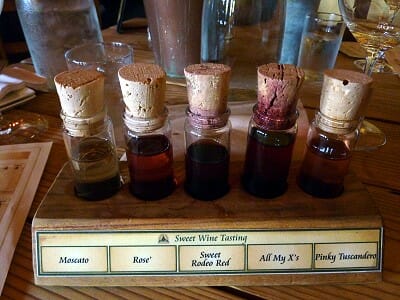 We finished our tasting and the scallops arrived. The dinner tasted as delicious as it looked. The jazz trio started and we enjoyed listening to the music while eating dinner and of course enjoying the wine.

After we finished dinner and the band had taken a break, we were pleasantly surprised when Jeff Sneed sat down at our table. He apologized for the way he looked since he had come from finishing the grape harvesting, but he looked fine to us. We had an enjoyable and fun conversation talking about wine, wineries, problems creating wine labels, and how they used to have themed events. One event he held was how he met his wife who is now the Chef at the winery. He said the Sangiovese from last year was made with New Mexico grapes, but the current one which they had just crushed was from Texas. He could not wait to get that wine bottled and have 100% Texas wine. He thought the band was on a really long break, so he excused himself to check on them.

We had a fantastic evening listening to jazz, eating dinner, drinking wine, and feeling like we were part of the family. Staying in the Los Pinos Ranch Vineyards cottage was an even bigger plus. After a peaceful night of sleep, we packed up and headed for the long trip home.

If you ever get the chance to visit East Texas, we highly recommend spending some time at Los Pinos Ranch Vineyards. Tell them Jeff and Gloria sent you!