We had previously visited Duchman Family Winery on our road trip to Driftwood Texas wineries and continued our journey to Driftwood Estate Winery.

As we ascended the dirt road leading to Driftwood Estate Winery, our guests were wondering where we were going since they aren’t used to driving on too many dirt roads. Welcome to the world of visiting wineries. As we reached the peak, we were surprised by the number of cars and two limos. Oh boy, this was probably going to be crowded. Sure enough, as we went through the wooden arches (new since we had been there last), we could see the tasting room was full. 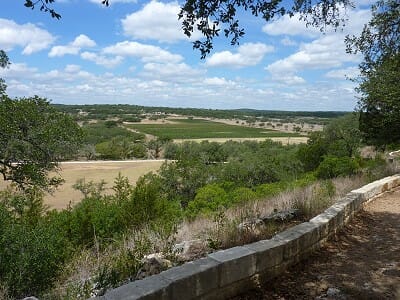 Everybody looked at the “best view” before we headed to the tasting room. 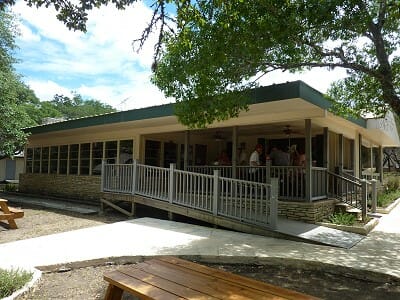 We entered the tasting room and the lady behind the cash register greeted us. I am sorry I did not catch her name as she tried to be very helpful. I asked if Laura Rood was there but was told she only works weekdays. I explained she was going to mention to Gary Elliot about our visit. She said Gary was in the production facility in back of the tasting room handling fermentation of some Sangiovese which had just been pressed. She phoned to the back and left him a message.

We had previously seen on Facebook they had some 2010 Christmas ornaments still available which were given out during the Texas Hill Country Wineries Holiday Wine Trail event. If you mentioned you saw it on Facebook, they would give you a free ornament, which we all received. While waiting to see if a tour of the production facility would take place, we went to do the wine tasting. 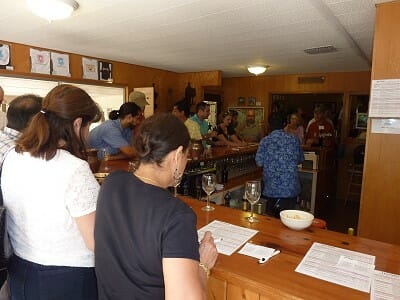 There is a tasting fee for five wines. During the tasting, I could swear I saw Gary Elliot walk through behind the bar. I had a nice conversation previously with him at the Texas Hill Country Wineries roadshow tour in Houston in April. We finished our tastings and went to pay. The cashier asked if we had talked to Gary and I said no. His daughter was standing there and she asked her to please go to the back and tell her father we were there.

We checked out and stood around waiting, not sure what to expect. A taller gentleman appeared behind the counter and then came out to introduce himself to us. He said his name was Patrick Johnson and was a winemaker at Driftwood Estate Winery. I had some questions prepared for Gary but they weren’t relevant for Patrick, so we all had some small talk. I could then see Gary standing behind the cash register. What could I say? So much for a tour of the production facility or interview with Gary. We thanked Patrick for saying hi and left the winery.

We asked what everybody wanted to do, eat lunch or visit another winery. We had decided to eat lunch at the popular Salt Lick barbecue and since it was easier to visit Wimberley Valley Wines and then end at Salt Lick because it was on the way home, we decided on visiting Wimberley. Patrick at Driftwood Estate Winery told us about Wimberley even though we already knew about them.

Wimberley Valley Wines has had a tasting room in Old Town Spring which we have visited many times. Production always happened in Driftwood but this year they were finally able to open a tasting room there since the dry county ban was lifted.

For some reason my GPS could not find their location so I did the old trick of using Google Maps brought up directly from their website and getting the GPS coordinate from there. On Google Maps, the location was shown to be off the main road of Lone Man Mountain Road. This turned out to be a big mistake as the GPS led us off the main road and eventually to the roughest dirt road we have ever been on. We finally decided to call it quits and head back to the main road where we eventually found the winery. 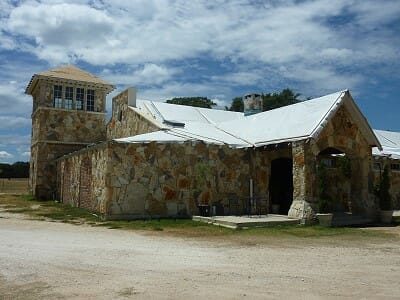 You can tell the tasting room at Wimberley Valley Wines is new as it was very nice and clean. There were also a large number of people already there at the tasting bar. We were able to squeeze into the bar and eventually only Gloria’s brother and I decided to do a wine tasting. There is a tasting fee for five wines and they do have more wines than Old Town Spring has to taste. 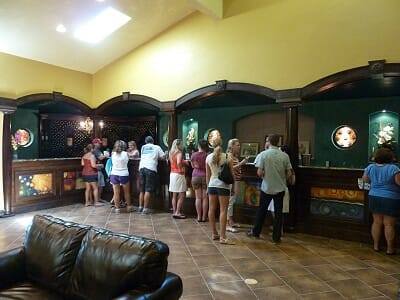 We had a nice tasting but since everybody was waiting for us, it was time to quickly leave and head to Salt Lick barbecue. As previously mentioned, Salt Lick barbecue is very popular and has even grown since the last time we were there. The boys were really excited to eat there since they had seen an episode of Adam Richman’s “Man V. Food” where he ate at Salt Lick.

After a great lunch, we left and while the rest were waiting for us, Gloria and I stopped by in the adjacent Salt Lick Cellars to see exactly what it was like. Since Duchman Family Winery had their labels to bottle, we knew Salt Lick Cellars used them to help with their wines.

As soon as we walked in the door, I immediately recognized the man behind the tasting bar, Alphonse Dotson. Alphonse, a former Oakland Raider’s football player, and his wife Martha Cervantes make a Muscat Canelli under the label of Wines of Dotson-Cervantes which is produced by Fall Creek Vineyards. We had previously purchased a bottle of their wine when we visited Fall Creek, especially because the bottle was autographed by both husband and wife.

Here in front of us were both of them now. Alphonse was very nice and told us Salt Lick Cellars wanted him to bring four cases of their wine to them which is why they were there. We said we had a previous bottle and had really enjoyed it. We could not help but buy another bottle and Alphonse autographed it especially for us. He asked if we had drunk the previous bottle chilled or really chilled. We answered chilled since we weren’t sure what he really was asking. He then recommended we freeze the bottle for 45 minutes, and then take it out, and as it warmed up the fruit flavors would change.

Gloria took a photo of me in front of the bar with Alphonse behind the bar. It didn’t come out that great since we were leaning in different directions so he said he would come around to the front of the bar. That is when we should have stopped and try to end the day on a high note. Another couple was listening in and the man with “baby on board” on his chest offered to take a photo of Gloria and me with Alphonse. He took the photo and then in the process dropped the camera on the cement floor. Enjoy the photo because it is the last photo that camera will ever take. 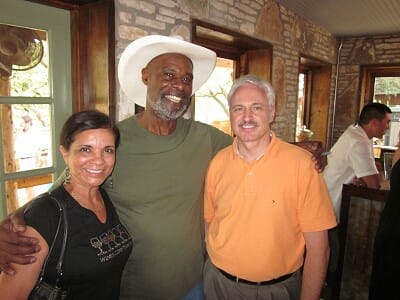 Gloria’s brother came in saying we needed to leave right away. As we left, the day continued its unexpected surprises as one of the van’s tires was almost flat. We limped our way to the closest gas station after going down the wrong way on a one way street, filled the tire with air, and continued our way home. Halfway home we stopped briefly to check the tire and fortunately it was still holding the air.

It was a long day and even though it didn’t go quite as expected, the overall goal of letting the kids experience a wine tasting was accomplished.