Los Pinos Ranch Vineyards is located in Pittsburg and is owned by Jeff Sneed. The winery opened in 2001.

We first learned about Los Pinos when we volunteered at a wine festival in Old Town Spring and they were there with a table. We met Sales Director Gerald Jones and he gave us his business card. He said when we make it to the winery, please let him know in advance and he would try to meet us. We contacted him prior to our visit and he was hoping to be at the winery that day, but being the Sales Director, he was going to be on the road most of the day. There was a chance he could be back by the time we arrived, so he wanted us to keep him informed. Unfortunately in the end Gerald was not able to get back in time.

When we arrived in Pittsburg, we saw a billboard giving directions but instead we followed our GPS which led us down a side street which perhaps was probably faster.

We wanted to take a tour of the winery and the last tour on the Saturday was at 5:00pm. We were being held up a little where we currently were so we called Los Pinos to confirm the last tour time and to let them know we were on our way, and fortunately they said they would wait for us. 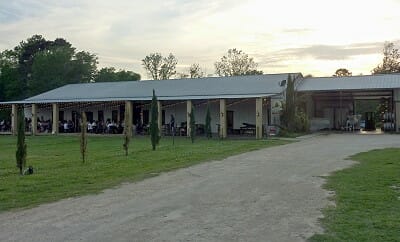 When we arrived at the winery, we quickly took an outside photo before it got dark and went to find where the tour was starting at 5:00pm. The porch tables outside the winery were almost full so we went inside. The room inside was large with tables and a band stage at the end. We found a man at the cashier and said we were there for the tour. He asked if we had called about catching the tour and we said we had. I knew in advance the owner and winemaker was Jeff Sneed, so I asked if he was Jeff and he confirmed he was. 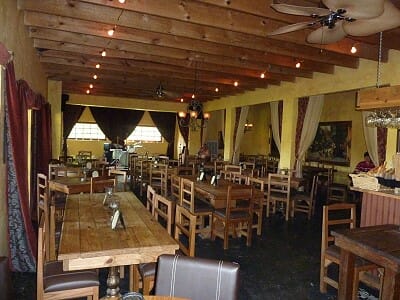 Jeff Sneed ended up giving the tour and since it was only the two of us, it turned into a private tour. Jeff gave a very interesting tour explaining the production process and the history of Los Pinos Ranch Vineyards. They will be expanding the production facility and making improvements. He also explained the oak barrels are used twice, and soon perhaps just once. Last year, Los Pinos Ranch Vineyards used 85% Texas grapes and this year he is hoping to use 100% for their Texas wine.

Jeff has a sharp wit with humor and it was fun listening to him explain things. Gloria doesn’t do too bad herself so she was often coming back with retorts. Jeff explained he got married in 2006 after he met his wife Dana at one of his winery events. Dana is now the Chef at Los Pinos.

After a fun and insightful tour, we were ready for a tasting. For the tasting, you can sit inside or outside. Since the porch has a beautiful view of the vineyards and it was a nice day, we decided to sit outside. 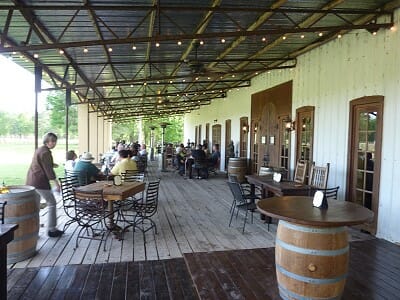 There is a tasting fee for five wines, dry or sweet. The tastings are done in the most unique way we have seen so far. The five wines chosen by Los Pinos are delivered in a dry flight or a sweet flight in small tubes with a removable cork, almost like test tubes. Since both flights contained red wines and we wanted to taste a combination of dry and sweet whites, we asked Ronnie, our server, if we could mix and match the wines. It must not have been a common request so she said she would check. Fortunately when she returned, she was able to bring one flight of a mix of wines for us. We assume she got permission from Jeff Sneed. One wine which she brought but was not in the list of dry or sweet flights was a Sweet Chardonnay. She said that was the vintner’s choice and that was fine with us.

After a nice tasting, we decided to stay and eat dinner. You can buy food and there is also a Chef’s special meal for dinner every Friday and Saturday. Even though the special chicken dinner sounded great, we usually do not eat much so we decided to share another entrée.

Live jazz events happen in the large inside room and the music is piped outside to the porch tables. The live music was about to happen but we had a long day so it was time to leave. While buying some bottles and paying for dinner and the tastings, we took a look around.  We didn’t see a gift shop but we could have missed it.

There are two cottages available at the winery to stay overnight. One was being renovated and we tried to stay in the other, but it was already reserved. That problem will be resolved this weekend as we will be staying at Los Pinos Saturday night. Through the Texas Winery Passport program, we reached a passport level where the reward chosen for us was dinner and an overnight stay at Los Pinos Ranch Vineyards. We can’t wait and we will talk about our stay in the next blog post.