TEXSOM stands for the Texas Sommelier Conference which is in its seventh year and is being held at the Four Seasons Las Colinas in Dallas. It was founded by Drew Hendricks (@drewhendricksms) and James Tidwell (@winejames). It has always been a two day event with excellent wine education. This year a first day was added called the Media & Technology Symposium with the goal of teaching attendees how to stay better connected with each other and consumers. The program for the day included a Social Media Boot Camp, Blogging, and Partnering with Traditional Media. Since I am new to blogging this year, I knew I would learn something from attending the day’s events.

Now I’ll be the first to admit when I started seriously drinking wine last year, I could not tell you what a sommelier was, let alone the correct way to pronounce it. I have even heard people just say “somm.” Surely that is easier to say but perhaps those people didn’t know how to pronounce it either. For your benefit, Webster’s Dictionary says to pronounce it sə-məl-ˈyā.

I signed up for the day and planned my weekend. I have been following and am being followed on Twitter by people who live in the Dallas area or who were planning on going to TEXSOM. I thought what better way to meet these people for the first time and so I worked with Melanie Ofenloch (@melanie0) who lives in the Dallas area to arrange a meeting Friday night prior to the weekend’s events so everyone could meet. It was all set up but unfortunately people couldn’t come because of other commitments or we never heard on Twitter when asked if anybody was going, so it was cancelled. I apologize to anybody else from TEXSOM who showed up and couldn’t find anybody.

I went to Plan B which was to visit CrossRoads Winery (@CRwineryFrisco) in Frisco to meet owners Bob and Darlene Leiker again in addition to Dave Potter (@texasgrapes), who I had not had the chance to meet yet. I had a fun night doing a full tasting of CrossRoads wines and entertaining conversation with all three people. I can’t wait to come back and do it again. We had previously given an award to CrossRoads for “Most Fun at a Winery” and I am proud to say we chose wisely.

Being the usual early bird, I registered at the conference Saturday morning before most people, but it allowed me to watch others come in and the first speaker Tony Jones (@jonestony) get prepared for the seminar. TEXSOM had requested for those who tweeted about the event to use the hashtag #TEXSOM and Tony had set up a website to display rolling tweets using the hashtag. It was being projected and it was interesting seeing what people were saying.

After a while, I started feeling like I really under dressed. Others were wearing suits, dress shirts/slacks, and here I thought a nice polo with good looking jeans was appropriate. I tweeted that comment and one of my Twitter friends, Mark Fusco (@1337wine), who I had seen come in but not yet met in person tweeted, “don’t worry I’m in jeans and a 1337 wine tee.” That made me feel better.

I learned the attendees were not only bloggers but people who owned or worked for businesses that needed to interact with customers. I was sitting next to Lee Fuqua and Courtney Key from FUQUA Winery so they were obviously there from the business side. I had met Lee in June when I visited his winery and it was nice seeing him again.

Drew Hendricks and James Tidwell introduced themselves, welcomed us, introduced Tony Jones, and the day began. Tony talked about social media with the primary places being Facebook and Twitter. He was going to talk about Google+ but even with three hours, there was not enough time to fit it in. He gave some good tips and recommendations on what he thought about social media. The attendees were very interactive so it was an informative session.

One person who had a business and Facebook Page already did not have what Tony recommended, a Facebook Page name for the page so the URL is simply facebook.com/Pagename. He showed the differences with his own and was going to work with her later to set up hers. He showed how he was able to switch between using his personal profile giving comments as himself and then comment as if it was coming from his Page. My tip: you don’t need to go to your Page to make the switch. Simply click the Account menu in the top right, select Use Facebook as Page, and click the Switch button next to the Page you’d like use.

Tony Jones did a great job and the three hours quickly ended. We broke for lunch and I met Russ Kane (@VintageTexas) who I had first met at the Texas Hill Countries road show in Houston earlier in the year. We found the restaurant, had lunch, and headed back for the afternoon’s seminars. I had an empty chair next to me in the morning so Russ took the seat. 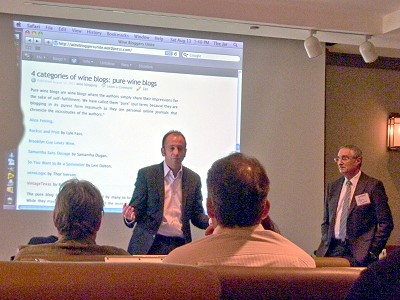 The first seminar was about Blogging which was held by Alfonso Cevola (@italianwineguy) and Jeremy Parzen (@dobianchi). This was the main seminar I was interested in. They had previously set up a quick blog for all of us called Wine Bloggers Unite and we were encouraged to post to the blog, introduce ourselves, and to keep the blog active.

They also encouraged people to post during the seminar. Russ sitting next to me took on the challenge. It was interesting watching Russ take photos and work with the programs to create his blog post. A number of examples were given for what they define as four different types of blogs. One example given as a pure wine blog was VintageTexas. They introduced Russ and he in turn told them about the post he had just done. Alfonso and Jeremy were given 90 minutes for their seminar and after giving much helpful advice, it was finished way too soon.

We had a short break and then the Partnering with Traditional Media seminar took place. This included a panel of journalists and they offered advice on how businesses should interact with journalists. To be honest, I did not pick up much from this seminar, but as mentioned previously, there were other attendees who were businesses and this was meant for them.

The seminars were then over and it was time to visit the four hospitality suites. Ahh, finally some wine! I went with Russ to the suites and the first one we picked was the one where they were giving out the results of the Introductory Sommelier Course. We met other Twitter friends, Denise Fraser (@DeniseFraser) and Jessica Dupuy (@JDewps), who had taken the exam and were waiting to see if they passed. They both did and were elated when they got their certificates. 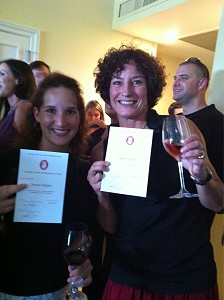 We also met up with another Twitter friend, Terry Hill (@Friscokid49), who had also taken the exam and passed. The three of us then ran into Mark Fusco again in one of the hospitality suites. The hospitality suites gave a good variety of wine and I came away with a few names of wines I need to look up later. 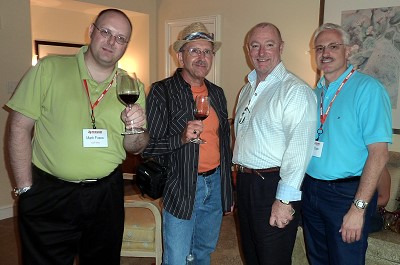 Overall, it was a very fun and informative day. I think TEXSOM learned that people really enjoyed the Media & Technology Symposium, and I hope it can be expanded for next year’s event which I definitely plan on attending.

hey! thanks for the shout out and great post on TexSom! So glad you enjoyed our seminar! blog on! 🙂

Thanks for an informative post and for covering things I couldn’t get to at TexSom. I really enjoyed your perspective, Blog on, blog-brother!

Thanks guys. Hope to see you again!

Great to spend the day with you. Wish you the best blogging possible.

Thanks Russ. I learned a lot from you on Sat.

MENU
wpDiscuz
5
0
Would love your thoughts, please comment.x
()
x
| Reply
Send this to a friend