Sometimes a day just doesn’t go as expected and you just have to deal with it. That’s how our road trip to some Texas wineries in Driftwood went this past weekend.

We attended a Texas Winery Passport reward for a private tasting for six people at Duchman Family Winery including Gloria’s brother and sister-in-law, and they liked it so much they wanted to go back. In addition they wanted their two minor boys (17 and 15) to be able to enjoy the wine tasting experience. Let me explain a little and say they are from Peru and the culture there is totally different from the United States. In Peru, it is very common for parents to allow children to taste alcohol. In fact, if adults are having a party and they run out of alcohol, the kids are often sent to the liquor store to buy more. You of course can’t do that here.

Since Gloria and I had recently completed the TABC (Texas Alcoholic Beverage Commission) Certification, we learned something interesting during the course. It is allowed in public locations for minors to drink ONLY if a parent is present and watching them drink. With that knowledge in hand, it did not seem like it might be a difficult task to have the boys experience a wine tasting. But before we headed out for a three hour road trip, I needed to confirm it was acceptable to the wineries we wanted to visit.

I contacted Bill Elsey of Duchman Family Winery who had previously arranged our private tasting reward, and he said the policy is parents can let their kids taste but only out of their glass. Bill said he was going to try to meet us at the winery and since they had fruit in their cellar, it was going to be a learning experience. Great, one winery down and as long as we are going that far, let’s see if we can give the parents and kids another experience.

Our next choice was Driftwood Estate Winery who had recently won our “Best View” award. It didn’t hurt that the winery is located about ten minutes from Duchman Family Winery. I had a thank you from general manager Laura Rood who said let her know when we were planning to visit again. Here was the chance to confirm with her. She said as long as the parent hands the glass directly to the child who is under 21 years of age, it is okay. She also said she would let Gary Elliot, owner of Driftwood Estate Winery know we were coming on that day.

With two wineries verified, we were ready for the road trip. Well, not quite. Wimberley Valley Wines, who has had a tasting room in Old Town Spring for years, recently opened a tasting room in April 2011 at their production facility. Since Gloria and I had never had a chance to visit there, we wrote the address down just in case we had a chance to visit.

Saturday morning arrived and the first of the day’s unexpected happenings occurred. Bill Elsey of Duchman Family Winery had contacted me late Friday night saying he had a last minute wine event to attend on Saturday but to contact Howard, the food and beverage director at Duchman, and he would be expecting us. I was a little disappointed because I was hoping to meet Bill but some day!

We arrived at Duchman Family Winery right at the exact time we had predicted but the next unexpected thing happened. The parking in front of the winery and adjacent restaurant was now only available to the restaurant according to the signs. Something must have happened because the restaurant has a large parking lot adjacent to the restaurant and Duchman Family Winery has none. There was a sign pointing to winery parking but we couldn’t find it. There was dirt along the paved road so we decided to park there. It turned out that is the winery parking in progress.

We went into the winery and the tasting bar after only being open for 30 minutes was pretty much full. I asked for Howard and it turned out it was Howard who I had asked. He asked if I had met Bill Elsey through Twitter and I explained the previous private wine tasting. So Howard was working behind the tasting bar and he prepared our first tasting. But then he went to the other side of the tasting bar and Cathleen took over. 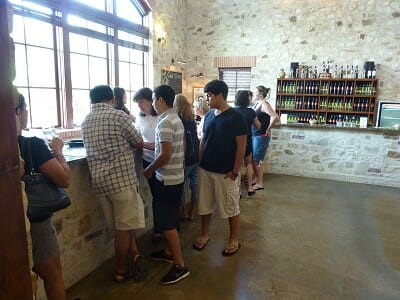 There is a tasting fee for the six wines listed on the tasting menu, and the tasting is free with a three bottle purchase. During our tasting Cathleen told us they grew seven different varietals in their own vineyard on the property. One grape, the Vermentino, was going to be used as an experiment and would be aged in a neutral oak barrel. One wine which wasn’t on their tasting menu is a Montepulciano which is from Reddy Vineyards, and according to Cathleen, similar to a Malbec. We had a chance to try it though.

We had previously realized we have wine glasses from quite a few wineries but none from Duchman Family Winery. We were going to resolve that on this trip but according to Cathleen, there are no Duchman Family Winery wine glasses which can be bought or to be included in the tasting. That was a little disappointing because even though it sounds a little peculiar, whenever we open a bottle of Texas wine from a winery, we like to use that winery’s wine glass to drink it.

I had mentioned to Howard that Bill said there was fruit in their cellar and he went to investigate. He came back and unfortunately they must have worked overnight to process the fruit since there wasn’t any there now. The winemaker was out checking the vineyard so there wasn’t a way to confirm that. Cathleen then asked if we wanted to take a little tour which of course we readily accepted. 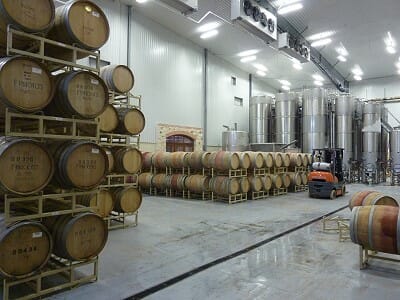 We went into the barrel room where she explained the barrels we were seeing were Elk Cove Vineyards barrels, located in Oregon, which had recently arrived. Cathleen said they were used barrels and had a lighter oak. She said it depends on how long a winemaker uses a barrel which could range from three to ten years. We have never heard using a barrel over five years from other winery tours. 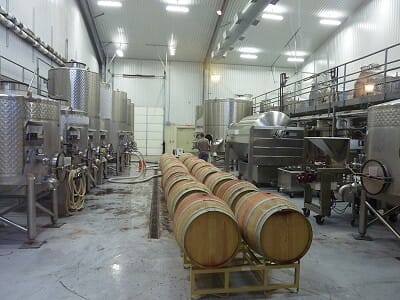 One interesting note was the bottling process inserts nitrogen in the bottles before filling. We had previously been at Caldwell Family Winery helping with the bottling and they use argon gas.

After a nice tour and tasting was completed, we all left happy with over a case of wine bought. Next stop, Driftwood Estate Winery.