Pilot Knob Vineyard is a new winery located in Bertram whose tasting room just opened June 18th. Pilot Knob Vineyard is led by Craig Pinkley, owner and General Manager, and Ross Wood, Director of Marketing. The two men did a lot of research in determining what kind of winery they wanted starting at the right Texas wine and down to the finest details on what is best for a tasting. They do not have a lot of winemaking knowledge so they are working with a consultant to handle that important step of making Texas wine.

Pilot Knob Vineyard made an impression earlier this year at the Lone Star International Wine Competition where their Texas wine 2010 Viognier was the only Texas Viognier which won a gold medal. With this kind of beginning, we had to make a trip to the Hill Country to visit the winery.

I looked at the winery’s website before we left for the day trip and it said if we wanted a tour to contact Ross Wood for an appointment. Since the winery had not yet opened for the day, I used their contact form to let them know we were on our way and we would love to take a tour.

On their website you can get directions to the winery using either Yahoo, Mapquest, or Google maps. Our GPS gave the same directions as Mapquest so we were on our way. Sometimes you just don’t trust a GPS and that is what happened to us. We missed the first turn which looked like a dirt road, and then the GPS sent us on a different road saying we arrived. Luckily we had printed the Mapquest directions so we were quickly back on the right road and found the winery from the opposite direction.

Vineyards are planted in front of the tasting room and we parked in the large parking lot. A cute little girl was outside and opened the front door for us. We were greeted by Robbie, who was going to be our pourer. She explained we could taste at the tasting bar or at one of the tables. We took a little walk around the large tasting room to decide and when we were on the other side of the tasting room, Ross Wood came up to introduce himself. After learning our names, he knew who we were because of the earlier email, so he began to give us a tour of the facilities.

Ross explained the room we were currently in could be used as a private event room and a divider could be used between the room and the tasting room. This way the event could still take place while normal wine tastings could be held. They are planning ahead on weddings as one part of the private event area is a bridesmaid room. They are also going to try to hold live music events twice a month, in addition to an occasional dinner. 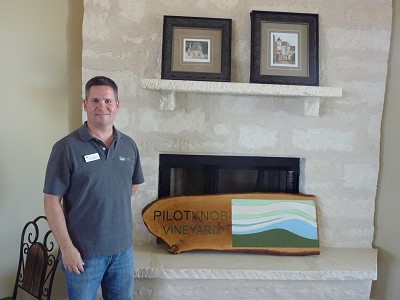 We walked outside and Ross told us they own 112 acres and plan on having 90 of those acres under vines in the future so the winery would be surrounded by vineyards. They are currently using 100% Texas grapes from the Lubbock area in addition to growing some of their own. The vines in the front are Cabernet Sauvignon which are three years old and also two year old Tempranillo.

The side porch has seating in addition to an inside/outside fireplace which will be great for colder weather. The walk around porch allows people to sit outside and enjoy the beautiful view of the Texas Hill Country. In the distance Pilot Knob, a hill that is part of an extinct volcano, can be seen. The hill was the inspiration behind the name of the winery in addition to being part of the winery’s logo. 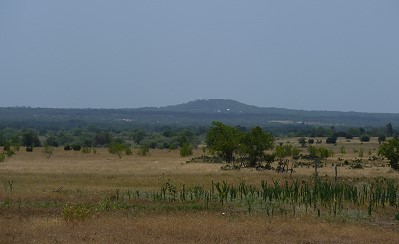 We then walked to the front vineyards where we looked at the Cabernet Sauvignon grapes which will be used to make their Texas wine. Ross explained how they are trying to use a technique which wraps the vines over the grapes to protect them from the sun. They have irrigation like other vineyards which is desperately needed right now with the lack of rain. Heavy winds occurred recently which damaged some grapes but for the most part they held up well. 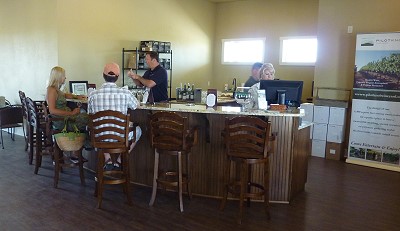 It was time for our tasting and we decided to sit at the tasting bar. Tastings are free for four to five wines. We had four because they were eagerly waiting on the fifth, a Cabernet Sauvignon, to arrive. Robbie put a placemat in front of us with the numbers 1 to 5. She then explained about each wine, poured it with a measured pourer, and placed it in a numbered spot on the placemat. The numbers matched a little menu’s numbers describing the wines. Ross told us later they had talked to different tasting rooms and had decided to do a tasting this way, similar to a micro-brewery. The taster is explained about the different Texas wines and then left to enjoy them on their own.

Corks are used for Pilot Knob’s red wines and screw caps for the other Texas wines. Ross explained they learned screw caps make it easy for the tasting room employees in addition to not having a negative connotation anymore.

Crackers are available to cleanse your palate during the tasting. You can also buy tapas like cheese with the primary focus on fresh bread. During the weekend the winery was having a 50% off special on whole grain loafs. The bread is baked right in front of you if you are sitting at the bar, and there really is nothing like the smell of freshly baked bread.

While we were enjoying the tasting, Craig Pinkley came over to introduce himself and talk with us for a while. You can obviously sense the enthusiasm both men have in their new venture.

A small gift shop is available in the tasting room. Pilot Knob has two forms of a wine club with different levels.

Since a winery has to be open for a little while before certain things can be done, there is no Texas Winery Passport code. Also needing to wait before ordering is the blue winery road sign you often see directing people to wineries. They are also hoping to become part of a wine trail, either the Texas Hill Country Wine Trail and/or the Way Out Wineries.

Craig Pinkley and Ross Wood have many plans for their future of Texas wine and from the start of things, it appears they are heading in the right direction.