Landon Winery has two locations, the square in McKinney and in the city of Greenville. Owner Bob Landon opened the first location in McKinney as a D’Vine Wine winery. After a year he then opened in 2005 what we know today as Landon Winery.

We were first introduced to Landon Winery from the Texas Winery Passport program. We had reached the reward level where wineries start giving rewards and our first reward was a private wine tasting with a winemaker for ten people. The winery giving the reward was Landon Winery and we were given a choice to have the private tasting at either Landon Winery location. Since we live over four hours away from McKinney and even farther from Greenville, we chose the McKinney location. Trying to get ten people together for the private tasting was very difficult but we did finally accomplish the feat. 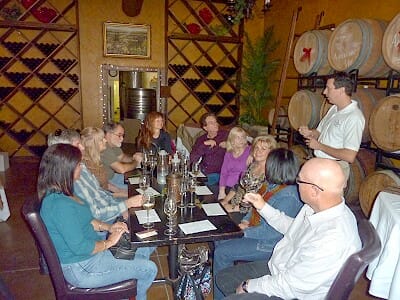 Landon Winery is very easy to find in McKinney since it is located in the center of town. The hardest part was finding a parking spot on a busy Saturday since McKinney itself is a tourist attraction with its quaint shops.

Brian Keffer is the general manager of the McKinney location and is also one of the three winemakers at Landon Winery. When we arrived at the winery, we learned he was going to hold our private wine tasting. After all our people arrived, we were seated in the barrel room and Brian introduced us to some of their different wines to taste. There were also cheese and fruit trays available to enjoy during the tasting. Brian gave us a little tour of the production facility in the back of the winery and all of us were able to sample a wine from one of the stainless steel tanks. Overall, everybody had a great time as Brian and Landon Winery were wonderful hosts. 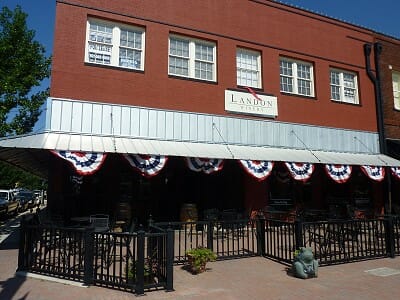 Since we had not done a public wine tasting, the next time I was in the McKinney area I did just that. We had not spent a lot of time at the Greenville location so I decided to do a full tasting in Greenville and a smaller tasting in McKinney. The pourer in McKinney on my last visit was Nichol.

Tastings are held while standing at the tasting bar and there is a fee for tasting five wines. I asked the percentage of Texas grapes used in their wines but Nichol did not know. We counted the wine labels and six wines were labeled as Texas which should mean 75% of the grapes used in the wine are from Texas. 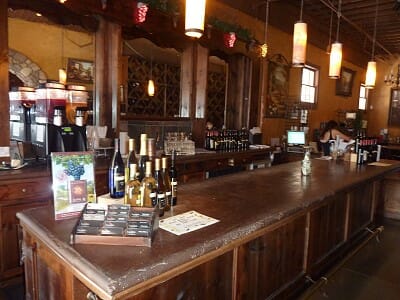 You can buy a cheese tray to eat along with your wine. There is a gift shop available with wine accessories and more. They also offer personalized labels you can put on their wine. The barrel room or the entire winery can be rented for private events.

Outside is a nice sitting area overlooking the McKinney square. Live music events are held every Friday and Saturday at the winery.

The Greenville location for Landon Winery opened in 2010. The location is set up as a large restaurant to serve both lunch and dinner. When I first walked in around lunch time, I was asked if I was ready for lunch. Sorry, I was interested in just doing a tasting. It was early for lunch so there were not too many people present in the winery at that time. Later on, the winery started filling up. 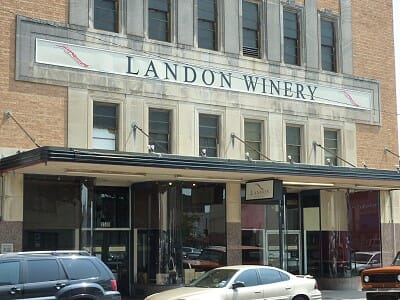 I was directed to sit at the tasting bar where Kathy helped me and also provided some information. As in McKinney, there is a fee for tasting five wines. All the wine is corked and Kathy poured from the bottle. The first pour was kind of funny because it was like a normal glass of wine. I said, “Wow, that’s a taste?” She laughed, corrected the mistake, and gave a normal portion for a tasting. I shouldn’t have said anything! 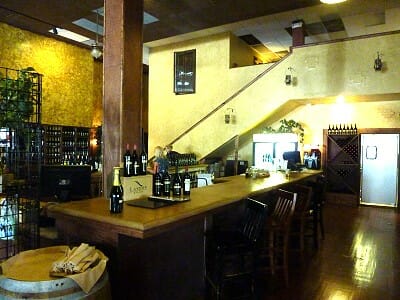 Landon Winery gets their grapes from the Lubbock area, but Kathy wasn’t sure either what percentage of grapes used in their wines are Texas grapes. They make at least these 100% Texas wines: Viognet, Tempranillo, Gewurztraminer, and a Tawny port that came in at a whopping 22% alcohol level. That was the largest percentage I have encountered yet in a Texas wine, and it was good!

I was asked if I wanted an appetizer while I tasted but I declined. Water was served during the tasting. Landon Winery has a wine club and I was told the many benefits of the wine club which are also described on their website.

Like McKinney, live music is also held Fridays and Saturdays. There is a room and mezzanine which can be rented for private events.

If you are in the McKinney or Greenville area, be sure to check out Landon Winery. Landon Winery’s two locations are on the Munson Wine Trail.