Gloria and I wanted to volunteer to help harvest grapes for a winery this year since we have never done it. Many wineries harvest their own grapes to make their Texas wine, but either they do not know exactly when they will be harvesting until close to the time, or they have a festival associated with the harvesting and a fee to participate in the harvest.

When we were confirming our VIP Private Tasting for 20 with Messina Hof, I asked if we could just volunteer to pick grapes. I received an email back from Messina Hof co-owner Paul Bonarrigo to contact him. He suggested if we just wanted to harvest grapes, we should arrive near the end of the festival guest harvest picking and then we could continue harvesting with his regular crew. Doing it this way would give us the most experience and we could also stop at any time. This sounded good so we agreed.

The day arrived and we learned it was going to eventually get to 102 degrees near Messina Hof. Oh boy, this was going to be interesting. 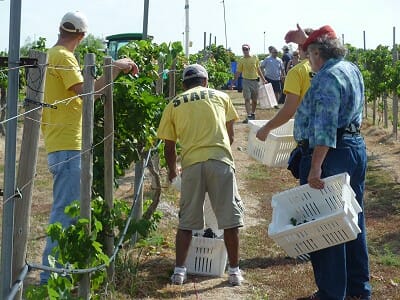 We arrived at Messina Hof and could see Paul and the other guests harvesting. We went to the group where Paul greeted us and showed us where to start and what to do. We had expected to be given pruning shears, but Paul said the grape clusters were so tender they could just be plucked from the vine. It wasn’t too difficult but Gloria later did ask for shears since some clusters were hard to get off the vine. Instead of the expected shears, she was given a curved knife to use.

The grapes grown at Messina Hof’s 42 acres vineyard are Black Spanish (Lenoir) and are used in making their port and another wine called Sophia Marie Rosé. After Paul and the other festival guests left to do grape stomping, we continued picking grapes with the Messina Hof crew.

Randy Herron took the lead in instructing us and the other workers on where to pick. We talked with Randy and learned he had recently worked at Messina Hof in 1994. He then left to work at E. & J. Gallo Winery in California and Yellow Tail wines in Australia. He came back to Messina Hof recently and is now the second winemaker besides Paul Bonarrigo.

Even though it was hot outside, fortunately there was an occasional breeze which would arrive to cool us down. The other workers were very friendly and were probably appreciative there were two new people to help harvest. As we would fill up a bin with grapes, someone was always there to give us a new one, and take our bin to add to a larger tub. We learned the workers would be harvesting the 42 acres of grapes daily. On top of that, a trailer arrived with white grapes which needed to be processed too.

While we were picking, we encountered a speaker system which played sounds of a hawk attacking. This is supposed to scare off birds so they don’t eat the grapes. A worker said the system wasn’t working too well because there was one area of the vineyard in which the birds had eaten quite a bit.

I mentioned some wineries used netting for the same reason and he said netting works great, however there are some negative things with it. Besides being more expensive, the netting has to be removed either the day before harvesting or has to be hung higher than the vines so the grapes can be harvested easier.

Paul Bonarrigo had mentioned on the phone his workers would probably be harvesting until noon, but it was around 11:00am when it was time to call it quits. That was fine with us since it was hot and I ended up getting a blister on my finger from pulling the grape clusters. If there is a next time, I’m bringing pruning shears to make the job easier. We both had a fun time but we also agreed we enjoyed bottling better, especially since it is a lot cooler! 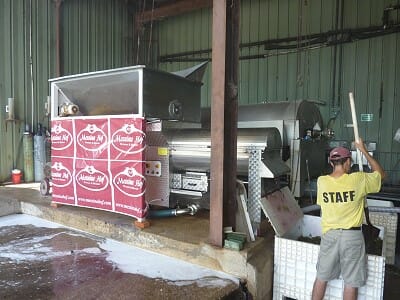 All tubs which were full of the grapes from the smaller bins were taken to the crush pad. We watched as a forklift took the tubs and poured the contents into the destemmer. As it sounds, this machine removes the stems from the grapes. The last tub poured was mostly full of juice so we assume this was the tub used by the grape stompers during the festival. 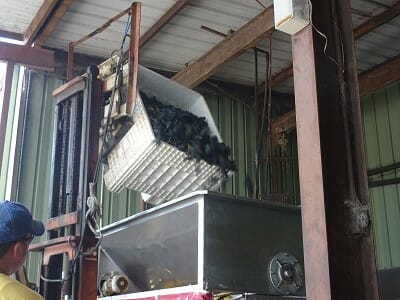 Our work was done and since we were going to attend the VIP reception later in the afternoon, we had previously found a motel in town where we could shower and get ready for the reception. After doing that and returning to the winery, we met up with our two guests for the reception and had a great finish to a fun day at Messina Hof.

The last day to harvest at Messina Hof for their Harvest Festival is August 14th. If you are going to be in the area, we would recommend signing up and also having fun at Messina Hof!