The Texas Winery Passport program is a fantastic program to get into if you are a consumer of Texas wines and especially enjoy visiting Texas wineries. The problem is not many people know about it!

We have explained to more than a handful of people about the program which we summarize as being similar to an airline frequent flier program where you gain miles and eventually can turn them into free airline flights. In every case, we are always thanked for the information and in some cases they wish they had known about it earlier as they had already visited Texas wineries.

So this post is directed to you, the Texas wineries. Wineries which participate in the Texas Winery Passport program receive a display which they usually display in their tasting room. The display holds a number of passport booklets along with the special Texas wine passport code for that winery. 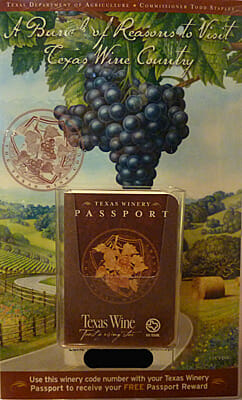 Most wineries we visit do have the display but we sometimes have to ask for the winery’s code. Most of the time, the person at the winery has a stamp with the code or knows the code by heart and writes it in our passport booklet. However, we have come across wineries which do not know their number so they end up having to call somebody to get it. Sometimes that phone call doesn’t produce a passport code and we’re told the next time we come in, they should have the code. This happened at Water 2 Wine in Houston.

We visited one local winery in Katy and it is a very nice winery. When we asked if they had a Texas wine passport code, the answer was the owners had not gotten around to apply for one yet even though they had been open for over a year. That’s too bad because the consumers who do know about the Texas Winery Passport program would surely visit their winery which would mean more business.

Maybe we do not know all the details behind the Texas Winery Passport program, but to us any kind of advertising, especially when somebody else is doing it for you, i.e. GO TEXAN website, is great advertising.

Another local winery is scheduled to open soon which I found out by calling them. They have been listed on the GO TEXAN website for a long time but just haven’t opened yet. He assured me he would have everything in place, including a Texas wine passport code, in time for the opening. Now that is one person in our opinion who understands what it means.

It’s Up to You

This year the state of Texas decided to cut the wine marketing budget for the Texas Department of Agriculture. We are not sure what that means for the Texas Winery Passport program, but we do hope it will continue in some way in the future especially for you, the Texas winery.