When we first started this blog, we had no idea how often we would post about our visits to Texas wineries. Eventually we’ll run out of posts because unfortunately there are just so many wineries. At first we thought we would do five wineries per post but that is one long post. We seemed to have averaged one to three wineries per post. We then thought instead of doing let’s say two wineries per week, how about one every few days and in the end that would mean the same two a week. With more posts, it might make things a little more interesting to follow with the website. So we’re going to try one winery per post. If we don’t happen to have much to say about a winery, we may end up putting two in one post. We’ll see how it goes. As always, we would love to hear your thoughts and suggestions.

Rohan Meadery is located in La Grange. We first came across Rohan Meadery when we were at the Houston Wine Fest. We had heard of mead, especially after attending the Texas Renaissance Festival, but had never tried it. We especially did not know it was considered a wine.

Before we continue, since we did not know what mead really was and to enlighten all of us, here is a little history lesson from Rohan Meadery.

Before grapes were cultivated for wine, before barley was malted to make beer, there was honey. Mead, also known as honeywine, is thought to be the oldest fermented beverage. Every European country as well as Ethiopia had a style of mead. With the advent of grape and barley cultivation and the rising prices of honey, mead fell into obscurity in the late 17th century. That is…until now.

We later volunteered to pour wines at Old Town Spring’s SpringFest Wine and Art Festival and Rohan Meadery had a table there. We met the owners John and Wendy Rohan and had a nice conversation with them. They said besides the original mead, they were coming out with some more traditional wine, but it still included honey. All of their wines, besides the original mead, include some percentage of pure Texas honey. After meeting them, we had to visit their winery, excuse me, meadery. 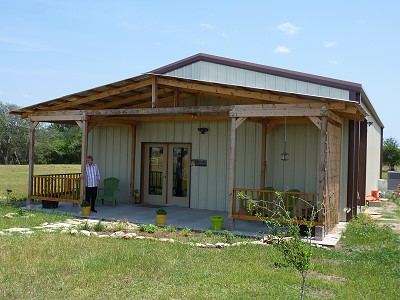 Rohan Meadery is easy to find. When we arrived, a group of people were just leaving with purchased bottles so they must have been happy. We went in and the group was just finishing up at the cashier, so we waited until they left before we did a tasting.

John Rohan served us because Wendy was busy with a birthday party. Right now they have four wines and are soon to have five. They did have the fifth wine previously but had run out and were finishing up a new batch. 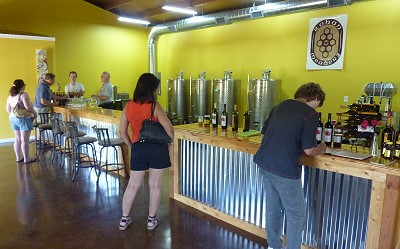 You taste the wine by sitting at the tasting bar and the wine is poured from the bottle. Chocolate is available to pair with some of the wine while you are tasting. All wines are corked with a glass cork.

John told us the winery opened in 2009 and they had just expanded into the new building where we did the tasting. At the present, they are growing Black Spanish and Blanc du Bois grapes. We could see the vineyards as we pulled into the parking area.

No gift shop is present but the tasting room is spacious and able to accommodate a large group.

Overall, it was a very pleasant visit and we learned more about mead and wine made with honey.