Update: The winery has now closed.

Alamosa Wine Cellars is on the outskirts of the small town of Bend. Jim and Karen Johnson are the owners and Jim is the winemaker. The winery was built in 1999 and the tasting room was built in 2004 after the “dry” county rules changed so wineries could sell their own wines retail.

Alamosa Wine Cellars specializes in making Mediterranean style wines using 100% Texas grapes. They use grapes grown in their own 10 acre vineyard in addition to other Texas vineyards. They were the first winery to dedicate their vineyard exclusively to producing warm climate varietals. Jim has been making wine since 1996 and was the first to produce a Tempranillo in Texas.

The first thing you’ll notice about Alamosa Wine Cellars is it is far out in the country! But after you visit, you’ll soon learn it was definitely worth the drive. Since we were trying to visit some of the Texas Hill Country Wine Trail wineries in the same day, and Alamosa was the furthest away, we decided to make that our starting point and work our way south to the other wineries. It is also convenient they open at 10:00am on a Saturday.

On our way there we were turning a corner and were surprised to see a little sign saying Winery. I knew we weren’t there yet and did not realize there was another winery way out there. (More on that later) 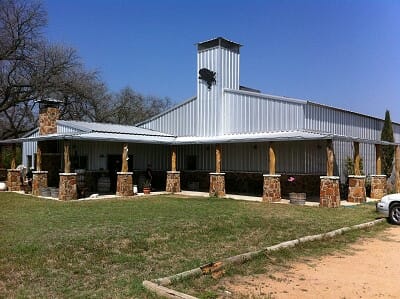 We made it to Alamosa Wine Cellars and drove down the long driveway with the vineyards on the side. Pulling up to the winery, you can notice their logo of a horned lizard (horned toad) on the chimney of the winery. As we pulled up, a dog ran alongside the car barking. We had gotten there before 10:00am so we beat whoever was going to open the winery. We didn’t have long to wait though and a car pulled up. It turned out to be Stephanie, our wine tasting guide. 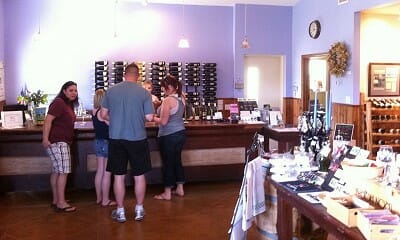 After waiting patiently for Stephanie to set up, we were ready to begin our tasting. There is no fee for the tastings and you taste while you stand at the bar.

While we were tasting, a lady walked in and said hello. It turned out to be Karen Johnson. She made sure we were enjoying ourselves and then also told us to ensure we stopped at Fiesta Winery, the other winery down the road. Oh, that’s what that Winery sign was for. We’ll talk about Fiesta Winery in a future post.

Alamosa Wine Cellars has a nice gift shop with wine accessories, gifts, and food products. There is also a covered outside area for enjoying a glass of wine or picnic. Dinners and parties are held at the winery, and a wine club is also available.

Since our visit, we met Jim and Karen Johnson at the Texas Hill Country Wine Trail road show tour in Houston and had a fun time meeting with them. We cannot wait to make another trip to visit them at the winery.

Alamosa Wine Cellars are members of both the Way Out Wineries and Texas Hill Country Wine Trails.

Thanks to Jim and Julie Baker for the photos.

Red Road Vineyard and Winery is on the other side of the state in Naples. The GPS had a little trouble finding the winery since the address isn’t exactly where they are located. This is because the winery is located on a parallel street to the main road across the railroad tracks. It didn’t help it was getting dark either, but we eventually found the winery and a fun crowd of partying people outside.

The winery opened in 2001 in a long building which was originally built as the first power and ice company in Northeast Texas. The tasting room is now inside the building where you can also drink your wine or you can opt for the raised porch outside the winery. 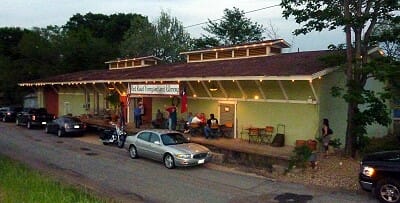 When we arrived, I ran up the hill to the railroad tracks so I could get a photo of the winery before it got too dark. That’s when we really encountered the fun party going on at the winery as they all wanted to be in the photo. We learned later someone was having a birthday party as there was a cake in the tasting room.

In the tasting room, another couple had just started doing a tasting. Since it was later in the evening, Gloria decided she was done tasting for the day, but I took advantage of tasting their wines. There is a tasting fee and if you want to try a port, there is an extra fee. The wine is poured from the uncorked bottles while you stand at the tasting bar. 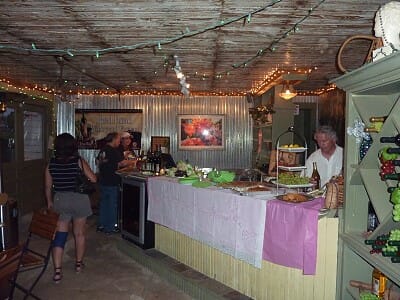 As I started tasting, we learned owner Merrill Grove was working behind the counter and handling the tasting. I took advantage of asking some questions while tasting, and he told me most of the grapes they use are part of a co-op for vineyards. He was busy with the other couple also, so I couldn’t really pinpoint if that meant he only uses all Texas grapes or not.

The other thing which really made me feel uncomfortable is after every wine Merrill poured for me to taste, he asked if I liked it or not. I felt like I was being put on the spot. He would ask if I liked it, and if I didn’t say it was fantastic, he seemed kind of put out. He especially was disappointed that I didn’t just love his four blended wine which had won awards. Sorry.

There are two ports from Red Road and the other couple wanted to try them. The owner said he could not let them try one port as people come in almost daily to buy it, so they would have to buy the port without tasting it at a cost of around $40. He did allow them and me to try the other port for an extra cost.

Since there was a birthday party going on, there was the aforementioned cake on the counter along with some other food appetizers in a three-tiered stand. We believe it was available for patrons to cleanse their palates, but did not get a chance to ask. It could also have been part of the birthday party. You can buy tapas though to eat while you drink a glass of wine. We did not see a gift shop.

Red Road Vineyard and Winery is on the Piney Woods Wine Trail.