Some wineries in Texas are very small and produce only a few bottles of their own wine. Some controversy exists whether these are true Texan wineries since they don’t have their own vineyards and may only be using grapes from outside Texas. There is also the situation where a winery may be in a dry county and some say they are taking advantage of Texas wine laws just to sell wine. Since we are equal opportunity wine drinkers, we visited some wineries in East Texas which perhaps fall into this last category.

The Blue Rooster Winery is located in Edgewood. There is no website available and you have to call for hours to find out when they are open. It took a few phone calls but we eventually found out their hours and were able to visit the winery. 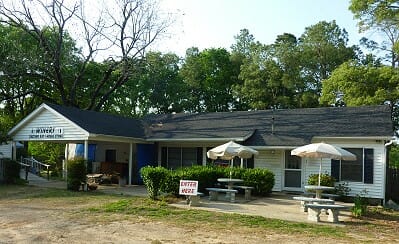 The winery is part of Alan Roush’s house, owner of The Blue Rooster Winery, and opened in 2008. Alan greeted us at the door and offered us to taste while we sat at the bar. He found out what kinds of wine we liked and started pulling different ones from the refrigerator to try.

There was no fee for the tasting. The bottles are corked and he poured from the bottle. During the tasting, Alan answered a lot of questions and gave us much information.

He has neighbors who have vineyards and are not interested in being a winery so he uses their grapes. He also uses grapes from Landon Winery and Los Pinos Ranch Vineyards. He explained he can’t afford a $100,000 grape press which is why he uses the other winery’s equipment. If one of the wineries is doing a blend and is left with a small amount of a type of wine, for example Merlot, and they can’t do another run, he will buy what is left over so he can make his small blend since he is not going to make a lot of cases anyway. 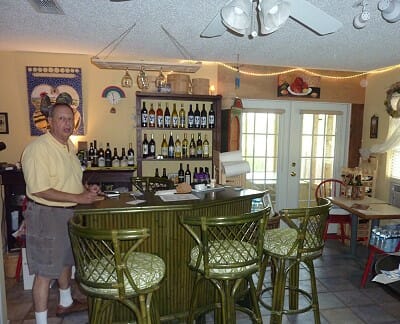 During the tasting, Alan would challenge us to determine the ingredients in an unlabeled bottle of wine. Gloria was pretty good at this challenge. We both were stumped at one wine though and he explained it was made from rose petals and honeysuckle. It actually wasn’t bad and showed you can make a wine from pretty much anything.

The winery does not have a gift shop like other wineries with t-shirts and other wine accessories, but offers cakes, cookies, and pastries from area bakers. Wines from other wineries are also sold. The winery is available for private parties and special events.

Gloria decided to buy a bottle of wine and we were surprised when Alan pulled an unlabeled bottle from a box and proceeded to label the bottle. It was interesting actually seeing a bottle being labeled.

He asked where we were going next. We answered Canton since our hotel was there and we needed to eat dinner. Alan said we must go to Savannah Winery & Bistro, hopefully meet Ed the owner, and eat dinner there since they serve excellent food. We decided to accept his recommendation.

Savannah Winery & Bistro is one of two small wineries located in Canton, and is owned by Ed and Flo Pickett. When we arrived, the only parking was located in back of the winery. We noticed there were some other buildings surrounding the winery but weren’t quite sure if they were stores, but one was definitely a small motel. 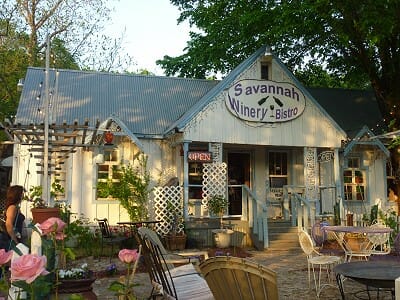 After walking into the winery/restaurant, we were greeted by a gentleman behind the cashier counter. When we said we were interested in a tasting and dinner, he directed us to a big round table in the same room with the tasting bar. The table had a “Reserved” sign on it but he quickly removed it for us. We asked if he was Ed who Alan from The Blue Rooster Winery mentioned, and he confirmed he was. Since we were going to do a tasting too, he recommended we order dinner, come up to the tasting bar, and then go back for dinner. If we did not finish the tasting, we could finish after dinner.

Savannah Winery & Bistro has a chef for their restaurant and we met Chef Todd Kivett next. Complete with chef jacket, he explained a few of their specials. Gloria decided on a shrimp dish and I chose tilapia. 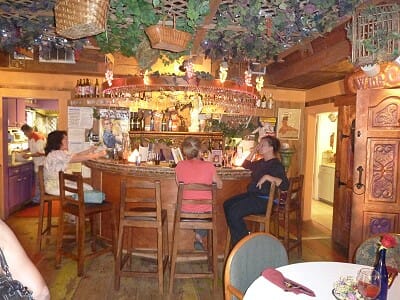 We sat at the tasting bar and Ed introduced us to his wines. He explained they make three wines, soon to be five. One of the upcoming wines will have $2 from each sale of a bottle go toward a veteran’s memorial fund. Grapes are from out of state for Savannah Winery’s wines. There was no tasting fee and the bottles are corked with tastings poured from the bottle.

With each Savannah Winery bottle which Ed poured, he explained why each label has its particular details. We were surprised when Ed also offered us tastings of wines from other wineries.

Chef Todd came out during our tasting to verify what vegetables we liked to ensure our particular dishes were exactly as we wanted. This was unexpected, but obviously we were very impressed. We had previously been to a winery’s restaurant to have a fancy and expensive meal prepared especially for us by the chef, and we never even saw the chef during dinner.

Dinner arrived and we returned to our table after choosing a bottle of wine to drink during dinner. Both dishes looked appetizing and we were both very pleased that all was excellent. Gloria and I do not usually eat a lot, so we were shocked when Gloria cleaned her plate and had half my tilapia too. The food really was that excellent. We know where we are going to eat the next time we’re in the Canton area.

After dinner, Ed surprised us by bringing two small glasses of chocolate port to enjoy. The biggest surprise came at the end though when we were leaving. On the way out, Ed said to hold on because he had something for us. He reached in the wine cooler and gave us a bottle of wine. We do not know what prompted his generosity, but we appreciated it nonetheless.

The Savannah Winery & Bistro opened in 2007 and has a little gift shop in the winery and restaurant. The winery is on the Piney Woods Wine Trail.

Texas Roads Winery is also located in Canton. When we arrived at the winery, a musician was playing and the bar was almost full to capacity. We bypassed the tables and went to the bar to do a tasting. Owner and winemaker Mike Ramsey was operating behind the bar and handled our tasting. 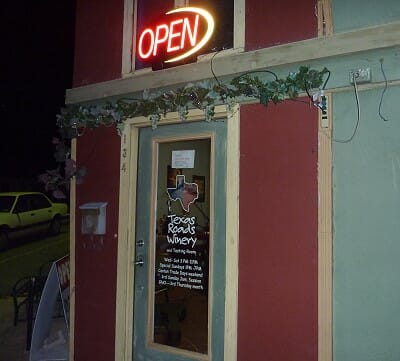 The bottles are corked and tastings are poured from the bottle while you sit at the tasting bar. There is a fee for tasting per wine.

Texas Roads Winery makes three wines. Mike explained since the winery is located in a dry county, they have to use at least 75 percent Texas grapes in their wine. They won’t know this year’s percentage until August when it is announced.

Gloria had enough tasting for the day so I opted to taste their wines. Hey, it’s a tough job but someone has to do it. While I was tasting, we were able to sneak in a couple questions for Mike while he was busy helping other people. 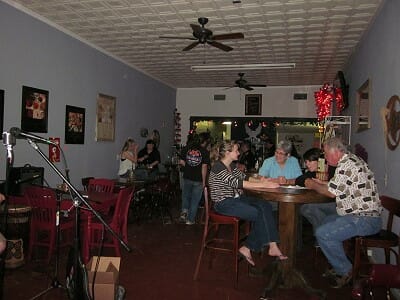 The winery opened in 2009 but moved to its current location last year. The winery is very popular with musical events, and even has a day where you can bring your musical instrument in to play and also just sing.

There is a small gift shop. Texas Roads Winery is on the Piney Woods Wine Trail.