In our first post in which we explained the purpose of the blog, we said we would discuss five wineries per post. As we thought more about it, we thought it would be interesting to show photos of the wineries. Including photos along with any descriptions for five wineries would make a very long post. Hopefully we will have photos of wineries we have visited in future blog posts, but we did not start taking photos of all wineries last year. Some wineries we did visit are unfortunately logistically too far away to revisit to take a few photos, so in those cases the descriptions of the wineries will have to suffice. How many wineries will be discussed in each blog will then depend on various things such as if there are photos, how much we can remember on previous visits, etc.

We’re going to learn as we go what we think might be interesting to you, the reader, about the wineries. So please if you want to know something we should describe for future winery descriptions and visits, please let us know.

We revisited wineries on the Bluebonnet Wine Trail this past weekend just for the purpose of taking some photos. Well okay, an ulterior motive was to enjoy the delicious wine too!

Retreat Hill Winery & Vineyard opened in Navasota, TX to the public in August, 2009. The winery is in a building adjacent to owner and winemaker Billy Cox’s house. When we first visited the winery, the tasting room was fairly small but we were greeted by a pleasant young lady to provide the tastings. At the time of our visit, there was only one location for the winery. 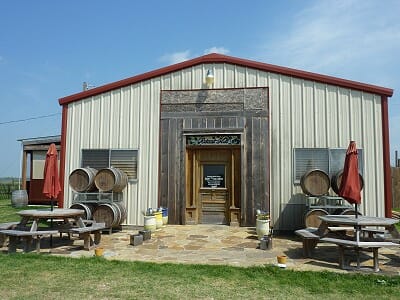 In August, 2010, Retreat Hill Cellars opened in Montgomery, TX to handle all the retail operations of the winery. Jeff has a friend at work who is on the Montgomery city council and told him in advance that Retreat Hill had applied to open the Montgomery location. When it opened, we had to visit. We had just attended the Montgomery Wine Festival a few weeks before our visit and of course Retreat Hill had a table at the festival. Upon our arrival at the new location to do the tastings, owner Billy Cox saw us and commented how we looked familiar which made us feel immediately comfortable. We are assuming he saw us at the festival and recognized us from there. More on the current tastings later.

Before our plan to revisit some of the Bluebonnet Wine Trail wineries to take photos, we noticed on Retreat Hill’s website how the winery is now only open to special events and wine trail weekends. In that case, we thought we would only be able to take a photo of the outside of the winery. The Winery & Vineyard address did not show up on our GPS but since we had been there before, we had a good idea where it was. When we arrived at the winery, we were pleasantly surprised to learn the winery was open. A large group of people with badges were just leaving. Billy (wearing a blue shirt in the photo) was behind the tasting bar and told us to wait since the special event people were leaving. 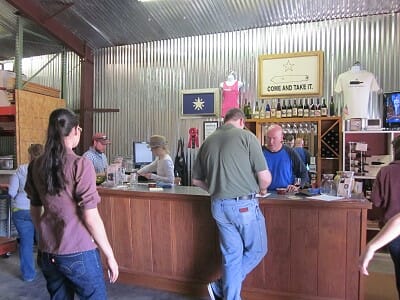 When Billy was free, he came to us asking if we wanted to do a tasting. He explained some of their wines could be tasted there but all the wines, including reserves, could be tasted at Retreat Hill Cellars. Since we were planning on going to Retreat Hill Cellars next, we opted to wait until then for some wine. We commented how the layout of the tasting room had changed to be bigger since the first time we visited it. Billy then took us outside and showed us the grapevines he had been pruning before the special event happened.

The vineyard was planted in March, 2009 and since it usually takes three years to get a full harvest, Billy explained how this year should provide a nice full harvest. He gave us some tips on how to prune which was very interesting. He also explained how he was starting to use an organic herbicide to kill the weeds around the vines instead of the usual chemicals. We were offered pruning shears but since our dry throats were ready for some Retreat Hill wine, we declined the offer. 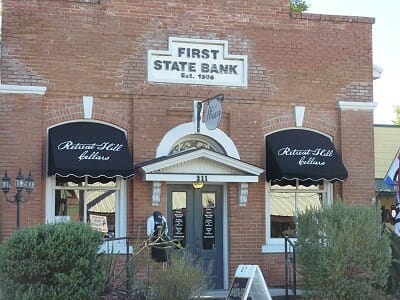 We arrived at Retreat Hill Cellars which is very easy to find since it is in the center of Montgomery north of the main intersection. Unlike last time when we parked across the street, we decided to park next to the winery, which was in front of an antique store. When we walked to the front door of the winery, we saw a little sign about parking in the rear of the winery on Pond Street. It probably would have been okay to park where we were, but we didn’t want to take a chance to find our car missing after leaving the winery, so we decided to move it. Not knowing the streets in Montgomery, we took a guess where Pond Street was and did find ample parking in the rear of the winery. 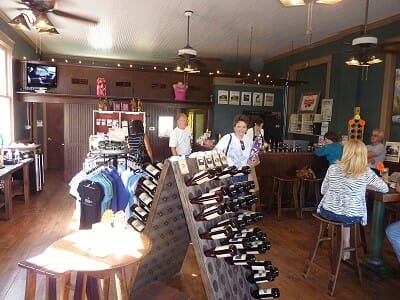 Tastings at the winery include your choice of four wines for a fee and the pouring is done with wine measured pourers in the bottle. Snacks are provided for cleansing your palate between tastings. You may be able to do the tastings at the various tables, but we decided to sit at the bar.

Since we had previously done the tastings, we knew what we liked, and both of us decided on a glass of Gewurztraminer. The TVs in the room were on the Food Channel and we enjoyed watching the cooking show along with the wine pourer. I decided on one more glass, but this time tried the sweeter Dulce Blanco.

The gift shop has plenty to see and there are also free tastings of various jams and salsas. All in all, the winery is a pleasant place to visit.

Retreat Hill Winery & Vineyard and Retreat Hill Cellars are both on the Bluebonnet Wine Trail. Visiting both will let you get two Texas Passport codes.